Vientiane is the capital city of Laos, a country in Southeast Asia that is frequently skipped in favor of more popular tourist destinations like as Thailand and Vietnam. It’s a modest, sleepy capital that isn’t even the most popular tourist destination in the country. With that in mind, it’s a destination where you can immerse yourself in true Laotian culture while also visiting some intriguing sights along the way. Vientaine  is located on a plateau that forms the border with Thailand and follows the tranquil rhythm of the Mekong River. The city is a tapestry of Buddhist cultures, French colonial buildings, café culture, and life in general. Known as the Land of a Million Elephants, Vientiane also plays a vital role in the economics, politics, and culture and the development of the country.

From other countries, travelers prefer to fly into Vientain’s Wattay International Airport (VTE) using some common airlines to the airport which are China Eastern, EVA, Lao Aviation, Thai Airways, and Vietnam Airlines. Many travelers also choose to fly into Udon Thani, Thailand, and then take a bus to Vientiane, as this local trip is significantly less expensive than a direct international flight. On the other hands, many travelers choose to travel to Vientiane from Bangkok by train as it’s simple. By using the daily overnight sleeper train from Bangkok directly to the Thanaleng Train Station in Laos then catch a local bus or tuk-tuk to central Vientiane.

It’s easy to get around Vientiane as the central city is walkable in large parts. Another excellent option for traveling around is to hire a bicycle. Renting a bike costs between 10,000 and 20,000 Kip per day, making it very reasonable. Taxis or tuk-tuks are your best option  if you need to go further locations and although neither Uber nor Grab are available in Laos, the local ride-sharing app LOCA may be a more cost-effective alternative. Vientiane also has a bus system, however it mostly serves the city’s outskirts, which are unlikely to recommended to tourists

The best time to visit Vientiane is between November and February, when the weather is often cool with a hint of warmth It’s worth noting that the Lao capital sees a lot of visitors throughout these months. If you visit in Vientiane in April then Expect hot, sticky days, but it’s also a fantastic chance to observe how the locals cool down with their New Year’s water festival. The Vientiane version is far more low-key than Thailand’s famous Songkran festival, but it’s just as enjoyable

The park, also known as Xieng Khuan and Xiengkuane Buddha Park, was established in 1958 by Luang Pu Bounleua Sulilat, a Laotian who later migrated to Thailand and established a similar park called Sala Keoku in Nong Khai, Thailand, on the other side of the Mekong river.

Over 200 concrete sculptures, ranging in size from little to very huge, may be found in the park. The Buddha, many Hindu Gods, demons, and mythological creatures such as a three-headed elephant are all weathered, giving them an aged appearance.

A three-story enormous pumpkin is one of the most remarkable sculptures. A gigantic legendary creature stands in the foreground, its gaping mouth acting as the entryway. Its three levels depict Hell, Earth, and Heaven, respectively. A stairway inside the pumpkin leads to the platform at the top, which offers excellent views over the park.

Despite the fact that some of its sculptures, such as a giant reclining Buddha, are venerated by local Buddhists, Buddha Park is not a temple. 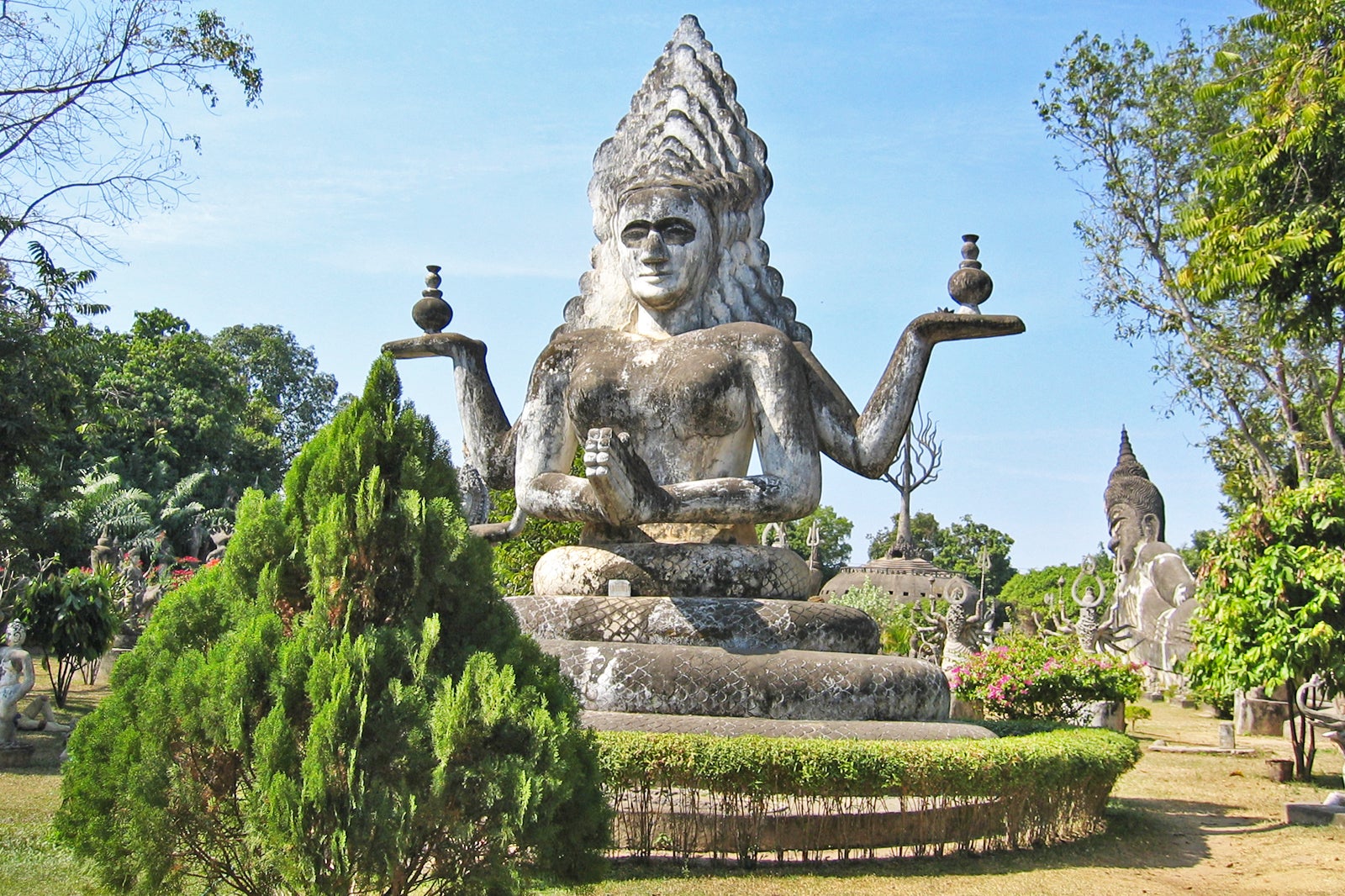 PHA THAT LUANG
Pha That Luang is the national symbol of Laos, built in the 16th century. The large golden stupa in Vientiane is believed to enshrine a breast bone of the Buddha. The pagoda also known as That Luang is officially named Pha Chedi Lokajulamani, which translates to “World Precious Sacred Stupa”.

After Vientiane became the capital of Laos in 1566, King Setthathirat constructed the existing construction. The main gate is guarded by a statue of the former Lao king. Pha That Luang’s central stupa is surrounded by painted turrets and stands 44 meters tall. In 1827 most of the city of Vientiane was destroyed and looted by Siamese invaders.

The Pha That Luang suffered extensive damage and was eventually abandoned. The French reconstructed it to its original style in the 1930s. The Pha That Luang has been included to the UNESCO World Heritage List’s Tentative List. 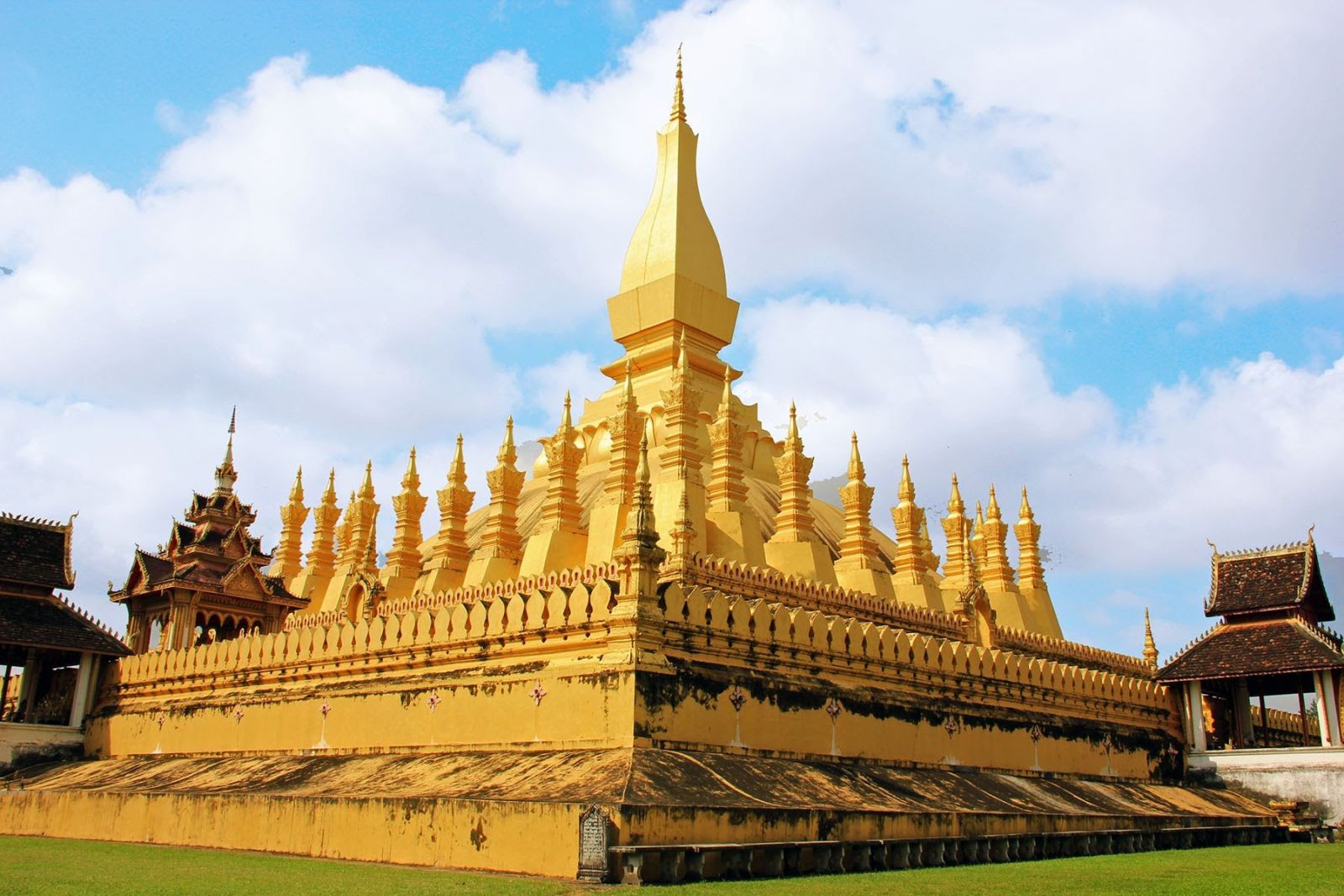 PATUXAI VICTORY GATE
The Patuxai Victory Gate, located at the end of Lane Xang Avenue, which leads to the Presidential Palace, right in the heart of Vientiane. Patuxai, which means “Victory Gate,” is a gigantic concrete monument with a wide roadway leading to it in the manner of Paris, France’s Arc de Triomphe. The Patuxai, sometimes known as Patuxay, was created in the 1960s as a tribute to those who died while serving their country in various conflicts.

With 5 beautiful towers created in traditional Laotian architecture, the outside contains Buddhist symbols and Hindu deities. The 5 Buddhist qualities of mindful amiability, flexibility, honesty, honor, and wealth are symbolized by the 4 corner towers and the 5th central tower that crowns the arch.

Visitors can walk a staircase to the top, passing through offices, souvenir stores, and vendors offering drinks and snacks on each of the seven stories. On top of the Patuxai, there are five Laos-style towers with flower designs. A golden finial crowns the four corner towers and the bigger central tower. The observation deck on top of the monument is reached through a spiral stairway in the central tower, which provides spectacular views of Vientiane and the Mekong River. 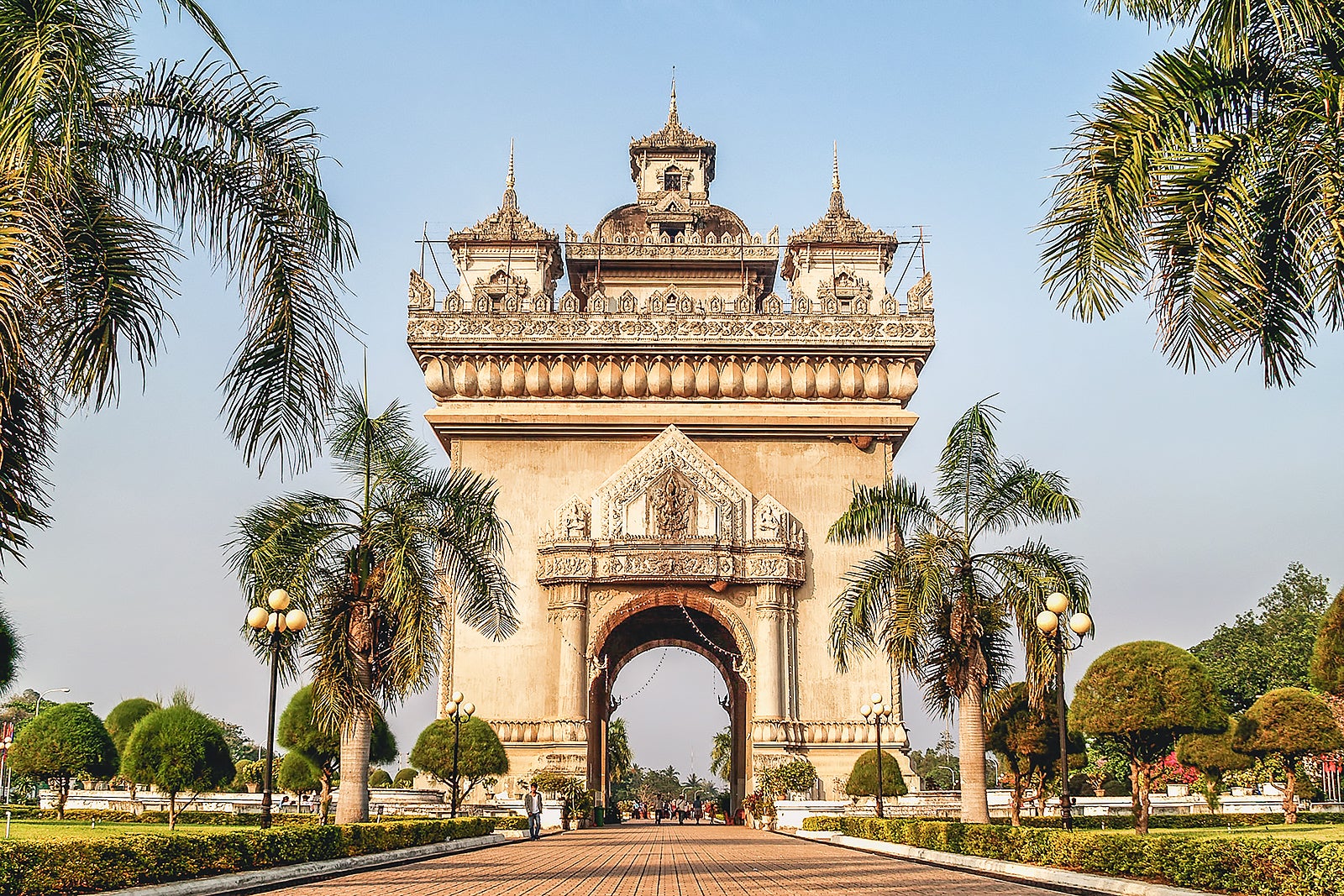 HO PHRA KEO
Ho Phra Keo (or Haw Phra Kaew) is a former Buddhist shrine in Vientiane that now functions as a museum of religious arts. It was founded in 1565. Because Ho Phra Keo features a gilded throne built for the Emerald Buddha, which currently sits on the grounds of Bangkok’s Grand Palace, locals refer to it as the “Temple of the Emerald Buddha.”

When King Setthathirath moved the Lan Xang Kingdom’s capital to Vientiane in 1565, he built the Haw Phra Kaew. It was built to serve as the royal temple of Laos and to house the Emerald Buddha, which remained here until 1779 when it was transported to Thailand. Since then, the image has been housed in Bangkok’s Wat Phra Kaew temple, which is located on the grounds of the Grand Palace. When the Siamese army stormed Vientiane in 1827, the Haw Phra Kaew was demolished. It has been renovated and refurbished multiple times since then; the current building dates from 1942, when the French restored it. The shrine is encircled by beautifully maintained gardens. On display in the museum is an item of exceptional curiosity which is a 2,000-year-old stone jar from the Plain of Jars. 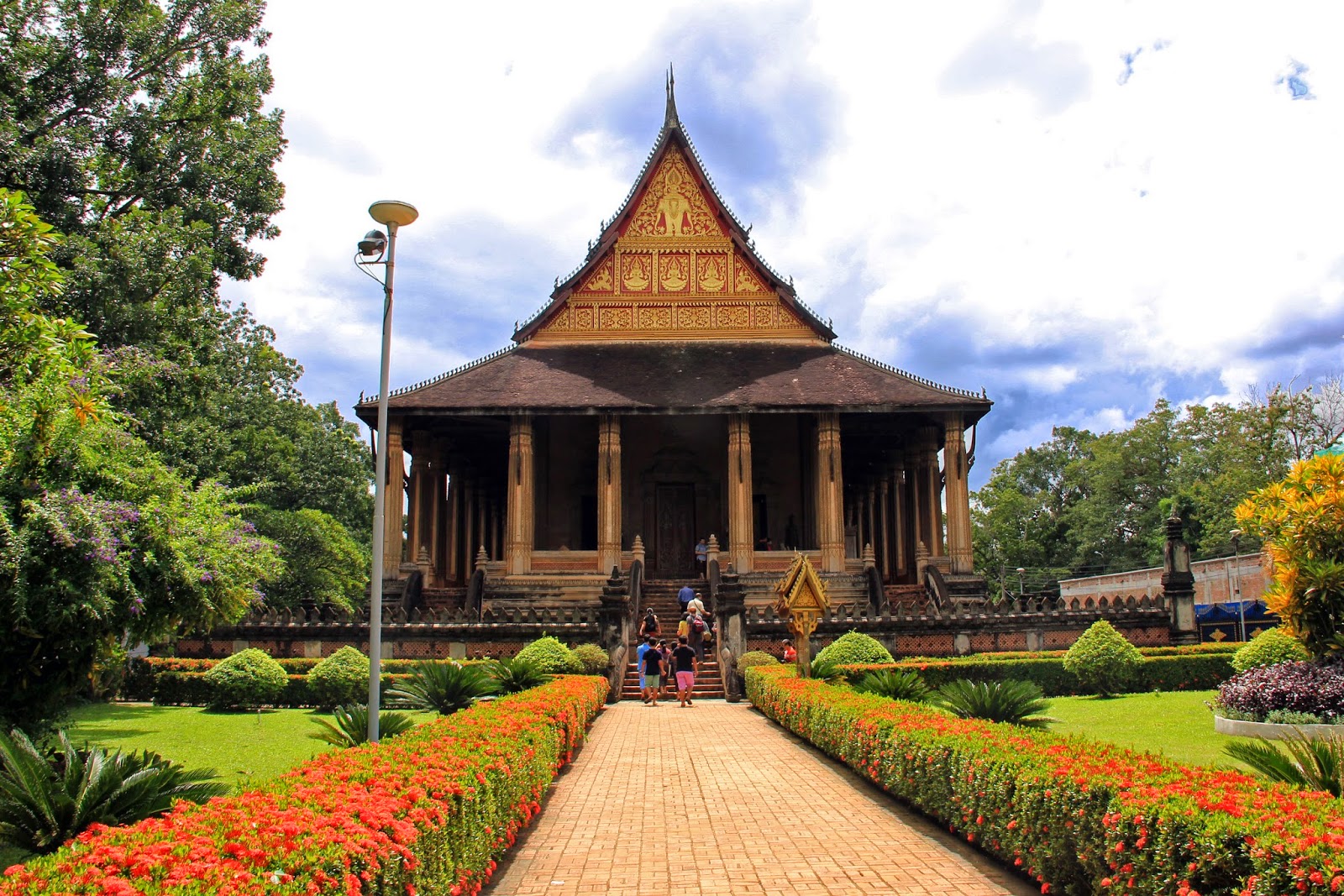 WAT SI KEO
Wat Sisaket is the city’s oldest wat, located on Setthathilat Road east of Nam Phou. The monastery was built by King Anouvong (Chao Anou) in 1818, and it was here that Lao lords and nobles swore an oath of loyalty to the king. This was the only monastery that survived the Siamese sack of Vientiane in 1828, and once the smoke cleared, the Siamese gathered the surviving Lao nobility here and forced them swear another oath of fealty, this time to their new conquerors. In 1893, the entire ritual was performed before new masters — the French – at the same wat.

The sim, which is encompassed by a tile-roofed courtyard, features some exquisite artwork in the manner of Bangkok’s Wat Phra Kaew. It’s ideal to take in the murals, as well as the niches in the upper walls containing miniature Buddha figures and the intricate ceiling, while kneeling on the floor (taking care not to point your feet towards the altar for more on etiquette). The Buddha figures on the altar are unremarkable, but a candle holder, made of carved wood and placed in front of the altar is a great representation of nineteenth-century Lao woodcarving. 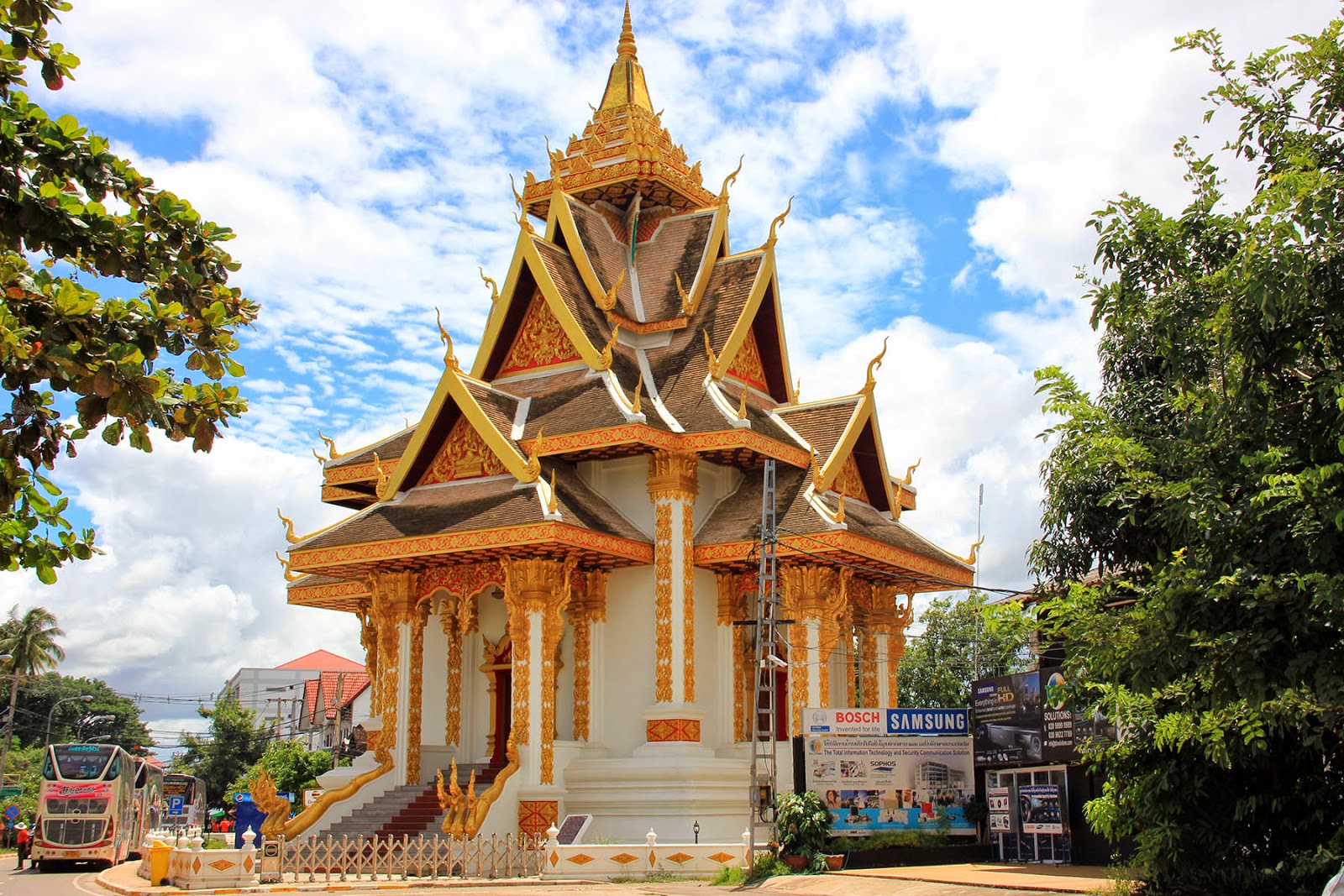