Welcome to Bangkok, a huge, humid metropolis with a population of over 10 million people that arose along the eastern banks of the Chao Phraya river just over 200 years ago. With a population of more than eight million people, Bangkok is Thailand’s capital and most important city. It has become one of Southeast Asia’s most prominent and contemporary cities, thanks to its rapid economic development and tremendous popularity as a worldwide tourist destination.

A destination unlike any other, rich in culture and offering a wide range of culinary delights that go far beyond a platter of Pad Thai. This city is a must-see and an unforgettable experience no matter when you visit. The city has a wide range of appeal, from casual tuk-tuks to market stalls, fashionable buildings, and delectable cuisine. There are numerous popular areas to visit, as well as plenty of traditional, world-class cuisines to sample. Whatever your reason for visiting, this is a place that offers romance, adventure, and family fun.

Bangkok is well connected to the entire globe by air, and the city has two airports. Bangkok’s Suvarnabhumi Airport is 25 kilometers east of the city, while Don Mueang Airport is 24 kilometers north. The Suvarnabhumi Airport is the biggest international airport in Bangkok and home to the majority of international and domestic airlines. It is connected to the city by buses, taxis, and high-speed rail service into downtown Bangkok. In addition, Bangkok has excellent train connections to the rest of Thailand as well as neighboring countries such as Malaysia, Cambodia, and Laos. The Hua Lamphong Railway Station is Bangkok’s primary railway station, serving trains from neighboring nations as well as other parts of Thailand. The Thonburi Train Station (previously Bangkok Noi Station) is a local or nearby train station.

Thailand’s most iconic transportation: Tuk-Tuk, which is effectively auto-rickshaws, is not only a fun way to get around but also highly convenient and cost-effective. The cost of a journey varies depending on the distance traveled; however, an average trip costs around 30 baht. Remember to bargain with the driver for a discount of at least 5-10 baht on the proposed fare.

In Southeast Asian cities, motorbike taxis are a common means of transportation. Many Bangkok residents prefer this low-cost but practical mode of transportation. Motorbike taxi is a fun and speedy method to get somewhere for solitary travelers, especially those who are adventurous. Most street corners near working offices or shopping buildings have motorbike taxi drivers wearing numbered orange vests. The cost of a trip is determined by the distance traveled, the time of day, and your haggling skills. A modest 5-7 kilometer ride will set you back anywhere between 20 baht ($0.57) and 30 baht ($0.86).

After the BTS, MRT, and riverboats have closed for the day, taxis become a practical mode of transportation in Bangkok. They can be found all around the city, particularly near tourist attractions, commercial centers, and hotels. For the first several kilometers, the fee is normally 35 baht, then steadily increases. Remember to ask the taxi drivers to use the meters is a good way to keep your money safe while traveling by taxi in Bangkok.

The BTS Skytrain is probably the greatest method to get around Bangkok. The Silom Line, which runs from west to south between the National Stadium in the Siam shopping district and Bang Wa in Thonburi (across the river), and the Sukhumvit Line, which runs from north to east between Mo Chit and Bearing, are the two BTS lines. The two lines intersect at Siam Station and also connect with the MRT at Sala Daeng and Asok stations.

The Bangkok MRT is another speedy and effective mode of transportation within Bangkok. It is popularly known as the subway, currently has only one line — the MRT Blue Line. The MRT Blue Line connects 18 stations and passes through the majority of tourist hotspots. Trains run every 5 to 7 minutes and stop at Sukhumvit and Silom stations, where they link to the BTS Skytrain.

Bangkok has a tropical monsoon climate, which means it is hot and humid all year. The city is best visited between November and March when the heat and humidity are at their lowest. Regardless of the season, Thailand’s tropical weather can easily reach temperatures over 35°C on any given day.

BANGKOK GRAND PALACE
The construction of the Grand Palace, also known as Phra Borom Maha Ratcha Wang in Thai, began in 1792 on the instructions of King Rama I, who had recently established Bangkok as the new capital city. The royal residence of Thailand from its inception until 1925, the huge riverbank complex is now used for ceremonial purposes, with parts open to visitors like us. While exquisite, the Grand Palace’s multiple halls, throne chambers, pavilions, gardens, and courtyards show a variety of architectural styles, as the Grand Palace was built and added to over the course of its more than 200-year history.

The Wat Phra Kaew Temple, which houses Thailand’s palladium – a sculpture thought to defend the country – is perhaps the most important of the ornately carved, golden-lacquered structures. Since its creation in the 15th century, the Emerald Buddha has been the country’s most treasured icon, despite the fact that it is carved from jade and stands just around 18 inches (45 cm) tall. The Buddha and his temple are both well worth seeing!
Please note that there is a dress code in place for people visiting the Grand Palace and many of Bangkok’s temples. When entering a room with a Buddha statue, cover your shoulders and knees and remove your shoes. WAT PHO TEMPLE
Wat Pho is a Buddhist temple complex located in the Rattanakosin Island area, just south of Bangkok’s Grand Palace. It is well-known as the home of Thailand’s largest Reclining Buddha statue. One of Thailand’s most important temples is Wat Pho. The complex, which was built in the 16th century and is located in the ancient Rattanakosin Island neighborhood, just over the road from the Grand Palace, houses the country’s oldest public education center, a Thai medicine school, and is renowned as the origin of Thai massage. More importantly for visitors, Wat Pho features Thailand’s greatest collection of Buddha images as well as the country’s largest Reclining Buddha statue. This gold-plated figure is 150 feet (46 meters) long and barely fits in the temple where he is housed!

The magnificent Reclining Buddha is definitely worth a visit, and the temple grounds provide for a relaxing stroll. Over a hundred finely carved chedis (also known as stupas) of various sizes; a bot, or central shrine; and a variety of viharas, pavilions, and gardens, as well as a small museum, are among the attractions. 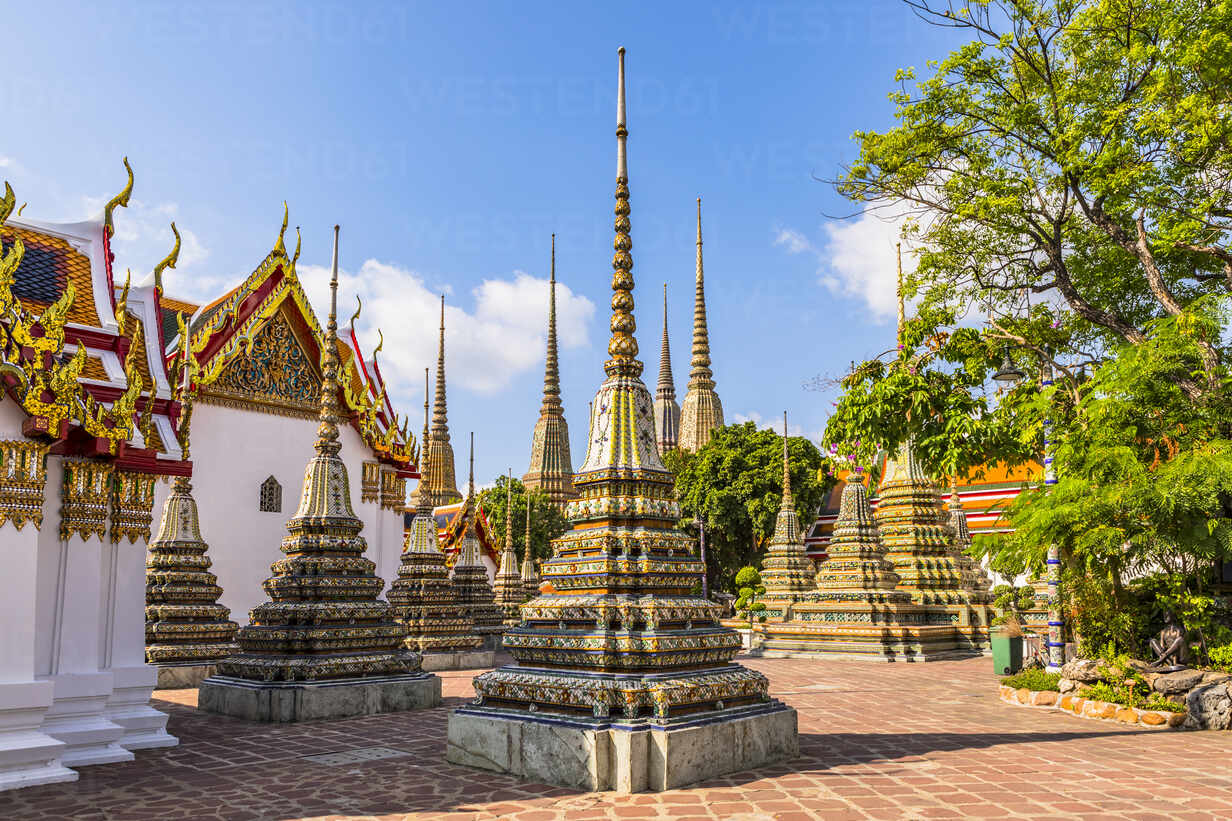 WAT ARUN TEMPLE
The central prang of the Wat Arun Temple is the highest in Bangkok, standing at roughly 82 meters (270 ft). The Temple of Dawn, as it is often known, was built in the manner of Khmer architecture, and was inspired by Cambodian sanctuaries. The highest central prang is claimed to represent Mount Meru, which in Tibetan Buddhist cosmology is the center of the world, with the four smaller prangs surrounding it containing representations of the four guardian gods. When the rising light illuminates the temple in the morning, porcelain mosaics and fragments of seashells cover all five prangs, giving it a shimmering iridescence. The tiles are ornamented with magnificent flower patterns in a variety of colors up close, and there are a number of spectacular murals showing scenes from the royals’ lives inside the bot, or ordination hall.
We recommend visiting Wat Arun on the same day as visiting the Grand Palace and Wat Pho, as it is only a short boat journey across the Chao Phraya River. Take in the view from the other riverbank for the greatest views of the sanctuary’s unusual architecture, whether at sunrise, sunset, or during the day – it’s well worth it!

DAMNOEN SADUAK FLOATING MARKET
Floating markets have become mostly tourist attractions in many places these days, although they were a part of Thai daily life for many decades until the motorbike displaced the boat. Amphawa, Taling Chan, and Damnoen Saduak are the most well-known of those that still exist. Damnoen Saduak is the most famous and popular because of its size, location, diversity of products, and design.
We recommend visiting the Damnoen Saduak floating market in the early to mid-morning hours to avoid the mid-day heat and to witness the market at its busiest before too many of the colorful boats and energetic traders vanish from the canals.
The ride from central Bangkok to Damnoen Saduak floating market takes around an hour, depending on traffic, and is best enjoyed with the assistance of a private tour guide who can answer your questions while emphasizing the various regions of the famed market.