Siem Reap is a cheerful city that embraces travelers like old friends. This region was the site of successive capitals of the Khmer Empire from the ninth to the 15th centuries – the fabled Angkor Wat Temple. While Siem Reap has its charms, Angkor is unquestionably the showstopper. This UNESCO World Heritage Site, surrounded by tropical jungle, is embellished with massive lotus towers and exquisite sculptures and is the world’s largest religious monument. Traditional Cambodian life still resonates throughout Siem Reap, despite the town’s modern improvements. You may learn about the local history and culture by doing things like meandering around the marketplaces or trekking through lush countryside to find a secret temple.

Getting in and out of Siem Reap is relatively easy, especially by air. The Siem Reap International Airport is just 20 minutes out of the town center by tuk-tuk and flies to a range of destinations in Asia. Siem Reap also connects with many long overland buses from Laos, Thailand and Vietnam or domestic traveling from Phnom Penh, which takes roughly 6-8 hours

A tuk-tuk, also known as a moto taxi or moto-ramauk, is a two-person motorized rickshaw. In Angkor, this is most likely the most popular form of transportation. A tuk-tuk is a covered vehicle with open sides that provides protection from the sun and rain. It’s easy to find a tuk-tuk driver because there are so many of them. Book one through the hotel or strike up a conversation with a few people on the street.  A day in a tuk-tuk will cost roughly US$ 15 to US$ 20 and make sure to negotiate the price before leaving.

A private cab with driver is another option for traveling around. A taxi provides shade and is frequently air conditioned, providing protection from the sun and rain. You can hire a taxi through a travel agent or a hotel. The cost would be roughly $30 each day, with an additional $10 to visit the most outlying temples.

Motorbikes are one of the cheapest modes of transportation in Angkor. Because foreigners are not permitted to drive in the Angkor Archaeological Park, the only option is to hire a motorbike with a Cambodian driver. Most hotels can arrange for a motorbike rental, which will cost roughly US$ 10 per day.

A rental bicycle is the choice that gives you the most freedom. It is also the cheapest mode of transportation; depending on the quality of the bike, a bike will cost between US$ 2 and US$ 4 a day. Bicycles are available for rent at most hotels and guest houses. Many of the major sites, such as Angkor Wat, Angkor Thom, Preah Khan, Prasat Ta Keo, Prasat Kravan, and the Eastern Mebon, are within cycling distance of Siem Reap town.

Lock the bike outdoors when stopping at a temple; a lock is normally included with the rent. Riding a bike exposes you to the sun as well as the possibility of rain. The roads will be dusty, and it will be hot and humid, particularly during the summer.

Like most Southeast Asian towns, Siem Reap has a tropical wet and dry climate with a long rainy season each year. To avoid the rain, visit the city between December and March, when daytime temperatures average in the upper 27°C  to 32°C and precipitation is at its lowest. And, regardless of when you travel, be sure to bring plenty of sunscreen.

ANGKOR WAT
Angkor Wat (Capital Temple) is the largest religious monument in the world, a huge complex on a site of 160 hectares. It is just 15 minutes away from Siem Reap, and it is extremely easy to reach. It is awe-inspiring to see, with its five lotus-like towers towering 65 meters into the sky. This UNESCO World Heritage site is located in Siem Reap and was once the world’s largest pre-industrial city. It is a must-see for any visitor to Cambodia and one of the world’s ancient wonders.

The massive Angkor Archaeological Park is home to the Angkor Wat ruins. It’s better to book a park tour with a trustworthy operator and guide who can assist you with purchasing admission tickets and transportation.

The temple ruins are all that is left of the Khmer Empire. From the 9th through the 13th centuries, the empire spanned much of Southeast Asia. It ruled over much of what is now Cambodia, as well as much of Thailand, southern Vietnam, and Laos. More over a million people resided in the capital city of Angkor at its peak. At the height of the Khmer Empire’s power, King Suryavarman II built Angkor Wat in the early 12th century. Scholars are split on whether it was intended to be a state temple or a funeral structure. The name means “City Temple,” and it is said to have taken 50,000 artists, labourers, and slaves to build. With a total area of 162.6 hectares, it is remains the world’s largest religious structure. 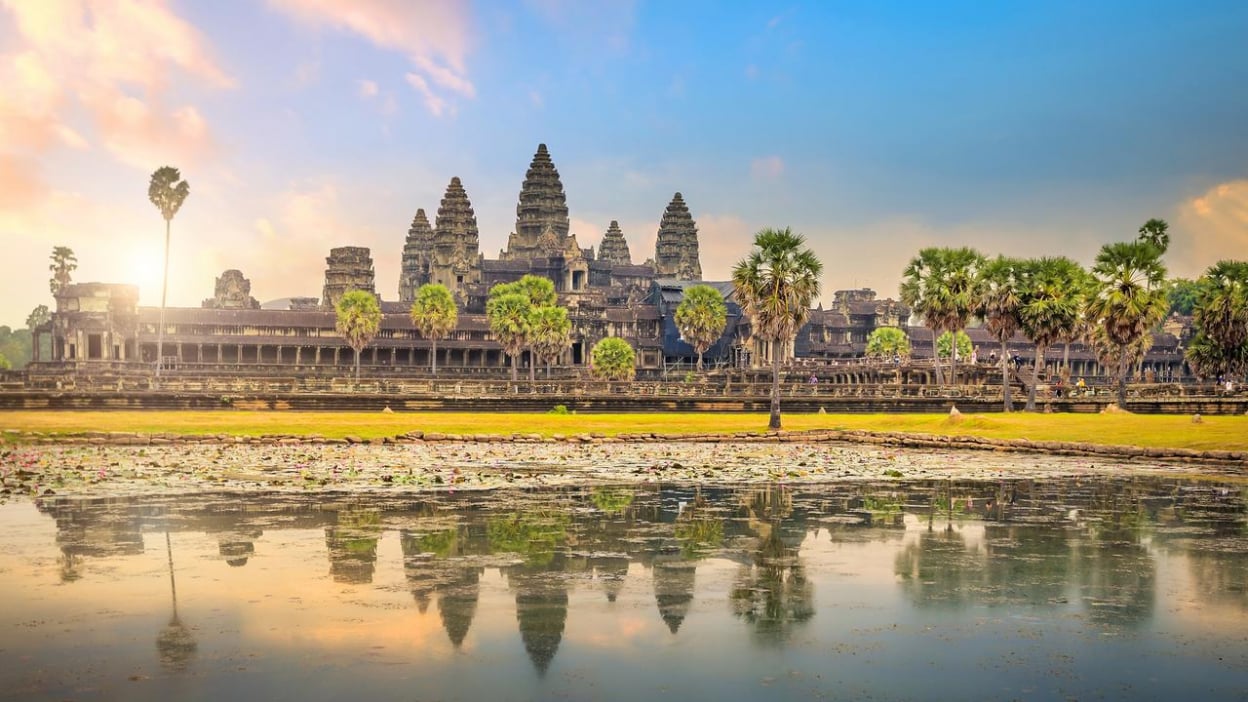 ANGKOR THOM
Angkor Thom (Great City), on the west bank of the Siem Reap River, was the Khmer Empire’s final capital. It was constructed after Angkor Wat (at the end of the 12th century) and encompasses a 9-square-kilometer area. In the 15th century, it was turned into a Buddhist temple.

When Jayavarman VII defeated the Cham invaders in 1181 and recaptured the Angkorian capital, he went on a massive building frenzy across the kingdom. He created Angkor Thom as the new capital city, which includes the Baphuon and Phimeanakas temples, which were previously there. At its heyday, the town was projected to have a population of almost a million people.

One of the five massive entrance gates must be passed through to access the city. Each of the four points of the compass (north, east, south, and west) has a gate, as well as the Victory Gate, which leads to the Royal Palace area. The bridges leading to the gates are lined with statues of gods and spirits, and each gate is crowned by four huge faces. 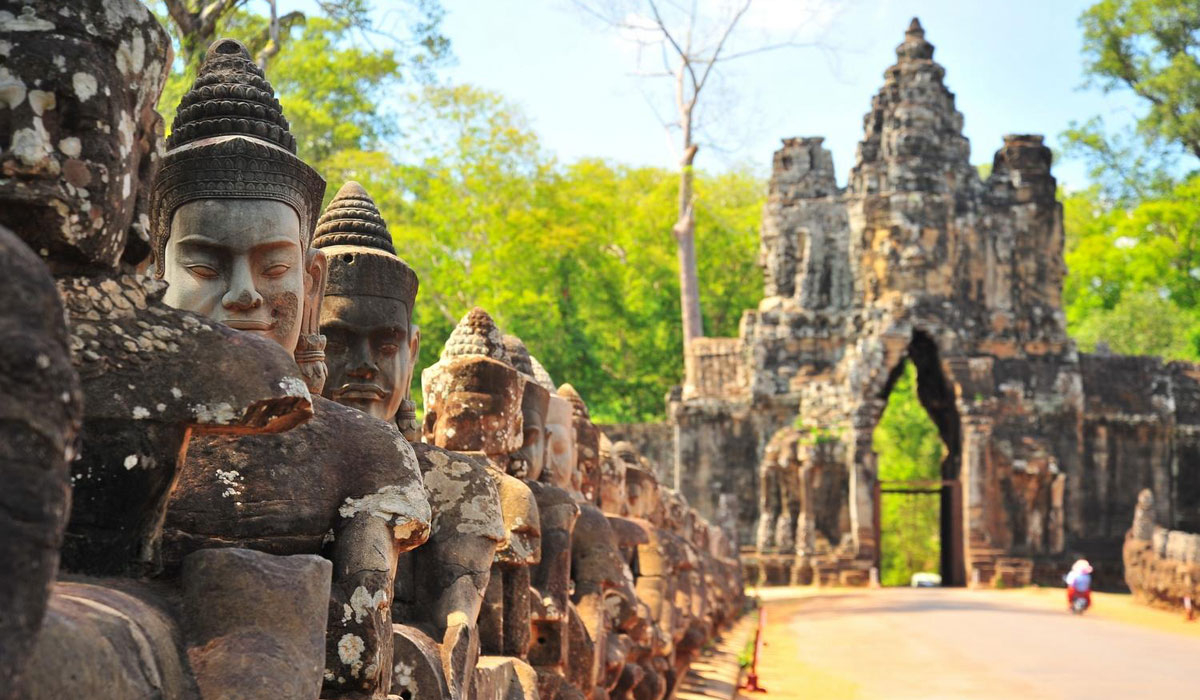 Bayon is located in the middle of the ancient city of Angkor Thom, which served as the Khmer empire’s symbolic center. This state temple was dedicated to Buddha by King Jayavarman VII and was previously known as “Jayagiri” (which means “Victory Mountain”) before being renamed “Banyan Temple” after the French occupation. After a long period of meditation beneath a banyan tree, the Buddha is claimed to have reached enlightenment. The banyan tree’s religious significance, as well as the numerous banyan trees that grew around the site, made it an acceptable name. The local Khmer who worked on the temple’s restoration were, however, responsible for the ultimate name change. The name was mispronounced as “Bayon” instead of “Banyan” by the workers, and the name remained.

Bayon’s serene stone faces are among the most iconic images from the Angkor Archeological Park, and losing out on the chance to view them in person would be a travesty. In reality, Bayon is one of the “big three” sites in Angkor that every visitor should see, together with Angkor Wat and Ta Prohm. The site also boasts an astounding array of well-preserved bas-relief carvings representing an odd combination of events from history, mythology, and everyday life, in addition to the number of enormous stone faces smiling down at you from every direction. Banteay Srei, considered by many to be the crown gem of Angkorian art, is carved from pinkish stone and contains some of the best stone carving anywhere on earth. It is one of the smallest sites in Angkor, having opened in 967 CE, but what it lacks in size it makes up for in grandeur. This Hindu temple dedicated to Shiva, known as the Angkor Art Gallery, is well preserved, with many three-dimensional carvings.

Banteay Srei means ‘Citadel of the Women,’ and it is thought that it was erected by a woman because the intricate carvings are too fine for a man’s hand.

Banteay Srei is one of the few temples in the Angkor area that was commissioned by a Brahman, who may have been Jayavarman V’s tutor. The temple is square and has entrances on both sides, with a causeway connecting the east and west. The three center towers, which are embellished with male and female divinities and magnificent filigree relief work, are particularly interesting.

TA PROHM
Ta Prohm, made famous by its appearance in the Tomb Raider film, enchants tourists with its mystical atmosphere of a temple lost in the forest, owing to the fact that it has been preserved largely as it was discovered. Ta Prohm temple, which was built in the late 12th and early 13th centuries, is stylistically comparable to the Bayon temple, which was also built at the time. Both temples were built by King Jayavarman VII, who converted to Mahayana Buddhism during his reign, which was unusual at the time.

As a Mahayna Buddhist monastery and university, the temple was constructed to house approximately 12,500 people, including priests and dancers. It was also a hub of high productivity and wealth, with roughly 80,000 employees from nearby communities. The temple’s original name was Rajavihara (which means’royal monastery’ in Sanskrit). Ta Prohm was built to honor the king’s mother, whereas Preah Khan Temple was devoted to the king’s father.

After the Khmer Empire fell in the 15th century, the temple was abandoned. Restoration work on the property did not begin until the early twenty-first century. 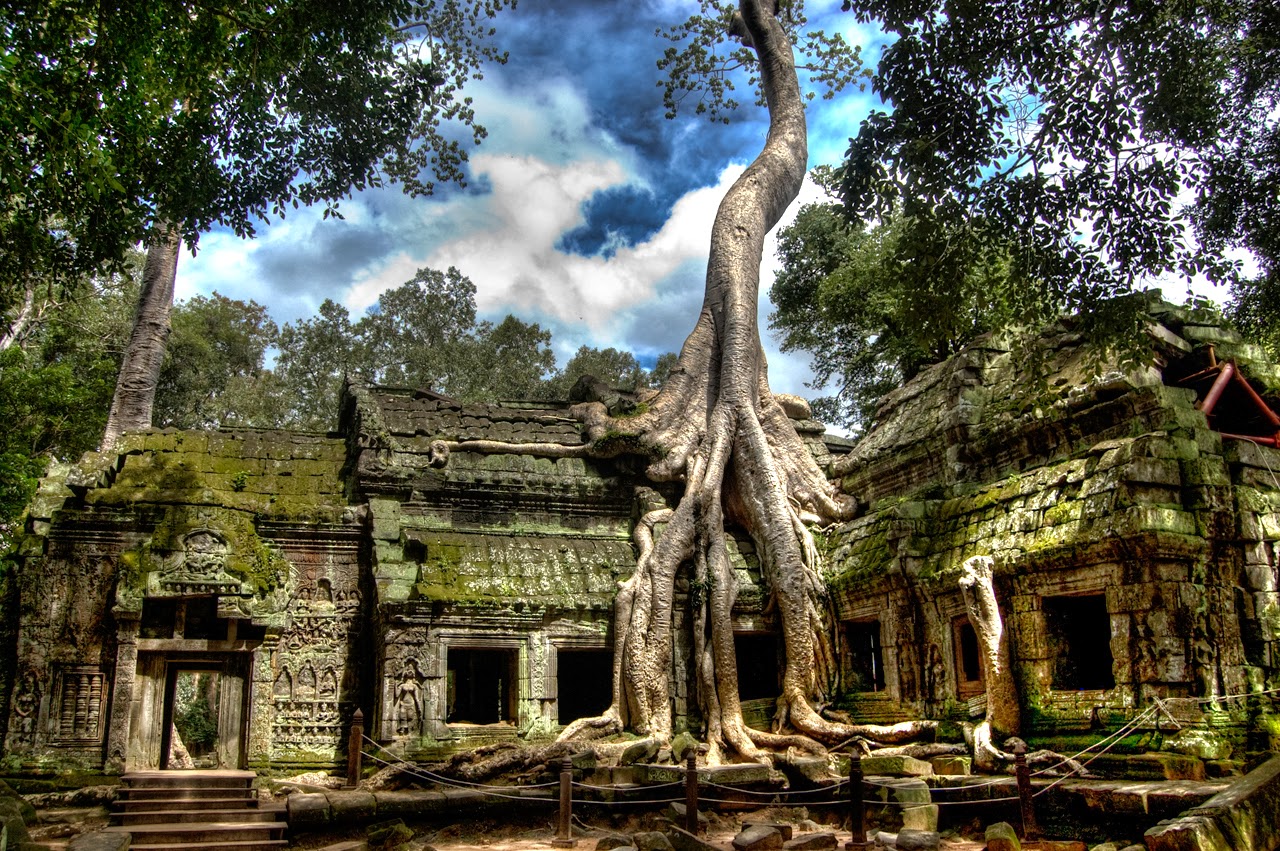 Phnom Kulen National Park, which includes Kulen Mountain, is one of Cambodia’s most popular tourist sites. The Kulen Mountain, formerly known as Mount Mahendraparvata, is a cultural and historical destination that witnessed the birth of the Khmer kingdom in the 9th century, when King Jayavarman II gained independence from Java and declared himself the ‘Chakravartin,’ or universal king.

The National Park located 50 kilometers north of Siem Reap and running for almost 13 kilometers down to the Angkor Plain, is home to a spate of temple ruins as well as countless centuries-old sacred carvings and sculptures. Most of Phnom Kulen is still undeveloped, allowing you to enjoy the cool, enthralling charms that nature has to offer in the form of jungle-covered green environs, rivers, and spectacular waterfalls.

Phnom Kulen National Park is around 30 kilometers away from the Angkor Wat, travelers can access by car, van, or tuk-tuk, and takes approximately 2 hours to get from Siem Reap. 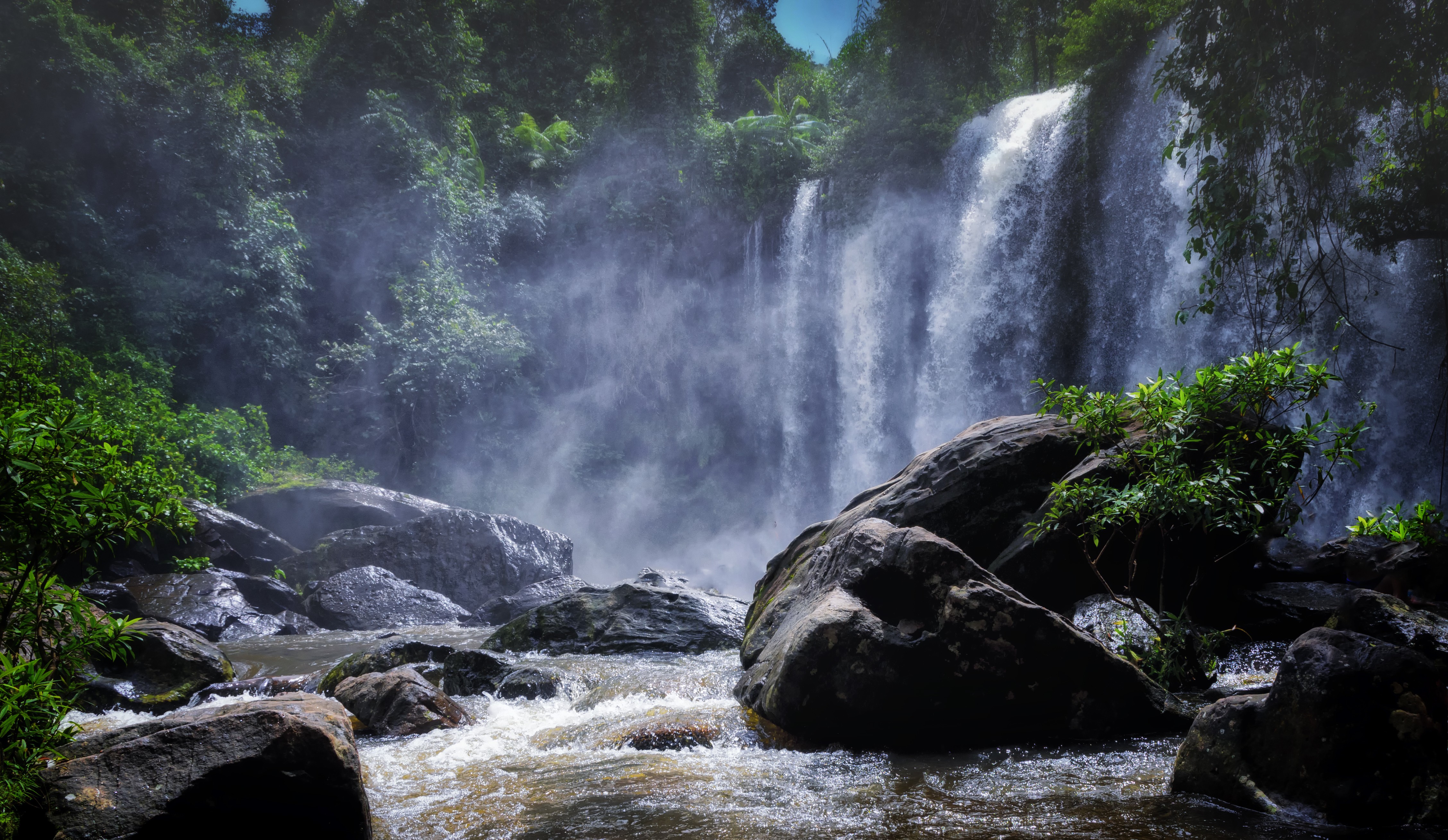 TONLE SAP LAKE
The Tonle Sap Lake is Southeast Asia’s largest freshwater lake. It’s also known as Boeung Tonle Sap, and it’s home to one of the world’s most thriving ecosystems. In and around the lake, there are several species of fauna that served to sustain and expand the ancient Khmer empire. It is also known for its intriguing local cultures and floating towns. The gigantic lake, which is located in Siem Reap, is 250 kilometers long and 100 kilometers broad at its widest point, giving it the appearance of an inland ocean because it is impossible to see the opposing shore from ground level. Surprisingly, it’s quite shallow, only 10 meters depth maximum.

In and around Tonle Sap Lake, there are various so-called floating villages, each of which is unique. Many of these villages, therefore, rely on the lake for its natural benefits.

Tonle Sap Lake is best visited during the rainy season (June to October). The Tonlé Sap River reverses its flow as a result of the Mekong’s water, which, when combined with the extra water from upstream, causes the lake to grow to five times its original size during the dry season. The grasslands and woodlands that surround it overflow, resulting in a diversified and rich ecology. It’s also when boat visits to Tonle Sap’s various floating settlements can be arranged. From December to April is the optimum time to visit the bird sanctuaries. 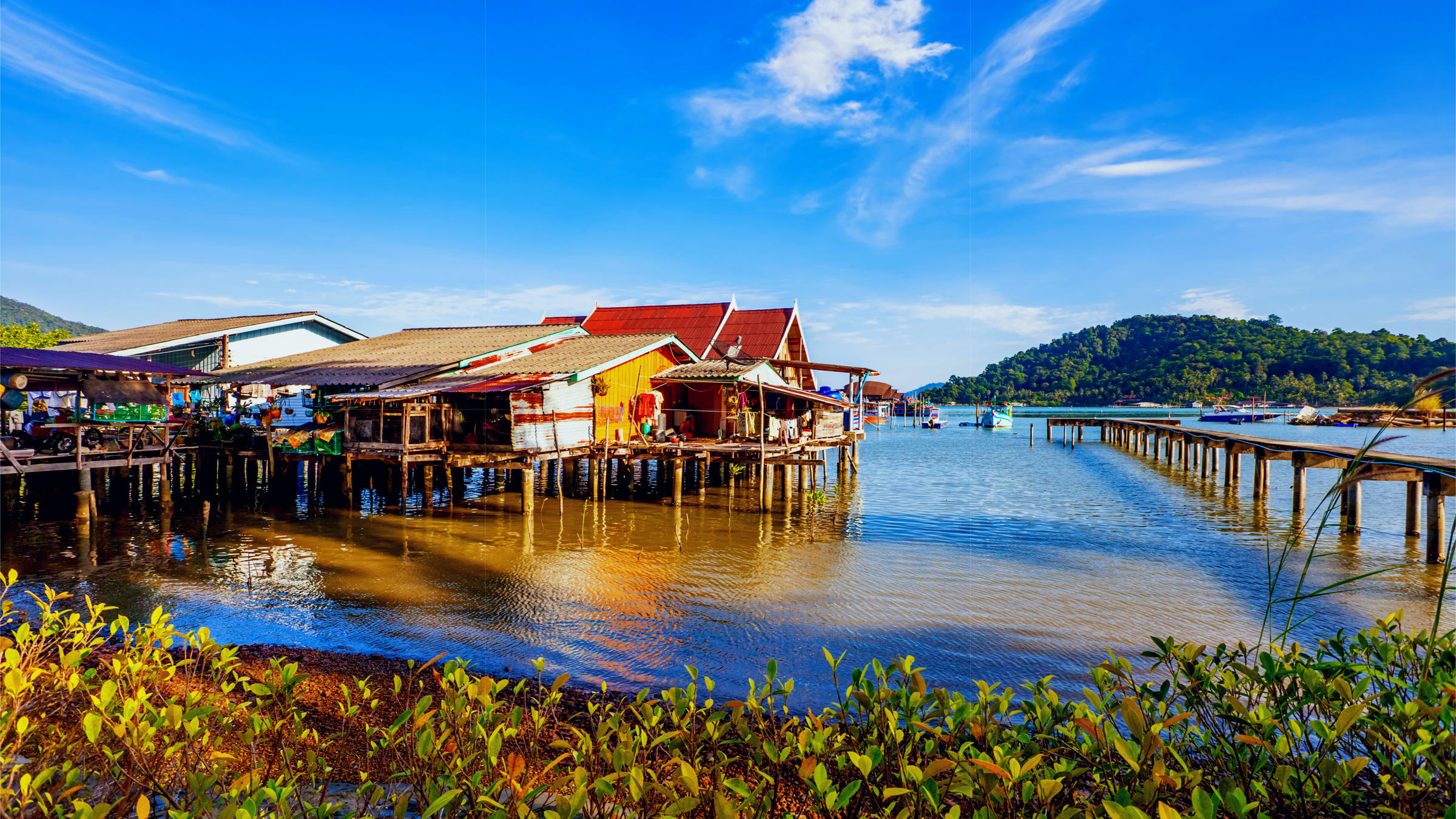 Jewels Of Vietnam and Cambodia Tours