Hue is an old charming city where memories of the past are kept. The last kingdom of Vietnam had its royal court located in Hue. Visitors to the city are enthralled with the elaborating architecture of Citadels, shrines, and monuments decently-preserved in spite of Hue’s stark history of war. Hue presents many Vietnamese intangible cultural values such as royal music, dances, and folk songs. The famous Perfume River and the lovely figure of Vietnamese ladies wearing traditional long-dress and conical hats are what make Hue so captivating to her visitors. Hue is also a hub of culinary culture in Central Vietnam with various tasty local dishes worth trying when staying in the city.

Hue has a domestic airport that is well connected with major international airports in Vietnam. Thus, wherever you first arrive in the country, it’s easy to take a flight to Hue. In addition, the city has its own train station so you can take a train and enjoy the scenery along the way. In case you have a lot of time and want to stay on budget, you can consider traveling by bus/ car.

It’s always good to have a contracted vehicle for your entire stay in Hue. Nevertheless, it’s convenient to grab a taxi or a motorcycle taxi which is interesting to go around the city.

Motorcycles are always a good option to experience local life wherever you are in Vietnam. Rent a bike to ride yourself or book one with a professional driver. This kind of transportation is so flexible and swift to sneak in every corner of Hue and its surrounding destinations.

Walking is recommended for every visitor while in the central town. It’s quite an experience to stroll along the Perfume River and sight Hue’s sorrowful yet romantic arrays of temples and monuments.

Anytime from November to March could be a good time to visit Hue. The city is scorching in Summer yet has comfortable weather during the end of the year and Spring.

THE IMPERIAL CITADEL
The royal citadel of Hue was built in 1804 to serve as the royal court and residence to emperors and the posh of the Nguyen dynasty. Inspired by the Forbidden City of Beijing, the citadel was a massive compound of various layers of embattlements encircling several palaces, halls, and colleges. The main entrance to the imperial citadel is Ngo Mon Gate which is relatively intact. What’s left of the magnificent citadel today unfortunately a few relics surviving the devastation of the Vietnam war and the decay of time. However, what is preserved on the ground of the attraction site still appeals to visitors who may spend half a day just to admire the beauty and glory of the past. THE TOMB OF EMPEROR MINH MANG
The tomb of Emperor Minh Mang is a work of art. Its brilliant location was carefully chosen to match with the King’s great status of royalty. Embraced by a well-tend garden, the tomb looks over to conjunction where the stunning Perfume River splits into two branches. The setting of the tomb follows the idea of Feng-Shui (Wind and Water) with hills surrounding and waterways in front. The architecture of the Tomb of Minh Mang is an exemplary practice of the Nguyen Dynasty’s architecture. 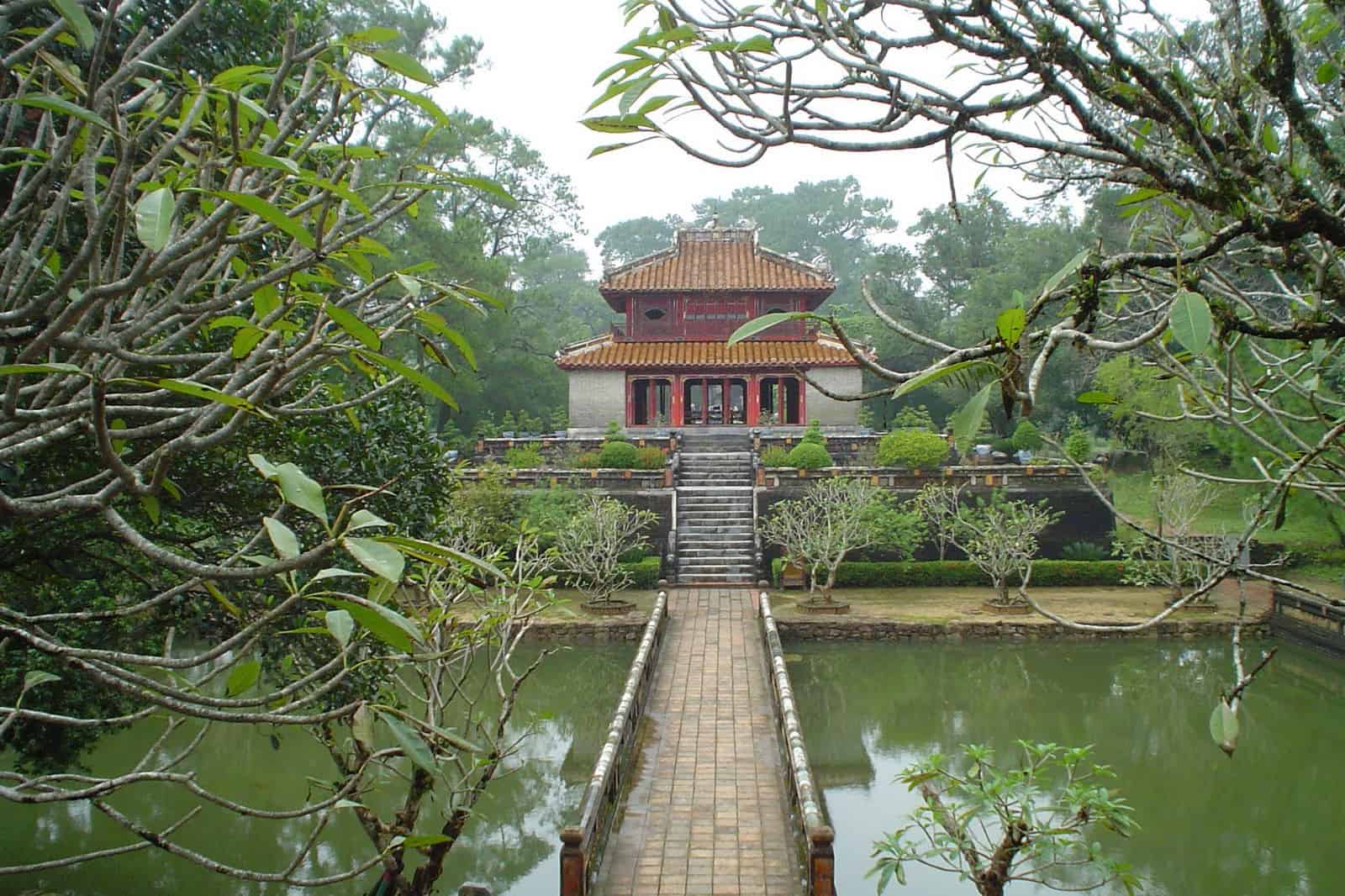 THE TOMB OF EMPEROR KHAI DINH
The last and mayhap the most beautiful royal tomb constructed during the Nguyen Dynasty is located on the Chau Mountain Range. Khai Dinh’s tomb is shrouded by a green robe of pine and sugar cane so that it’s complemented by the beauty of Nature. It was completed in 1931 after eleven years of construction with an astonishing mix of oriental and western architectural styles. 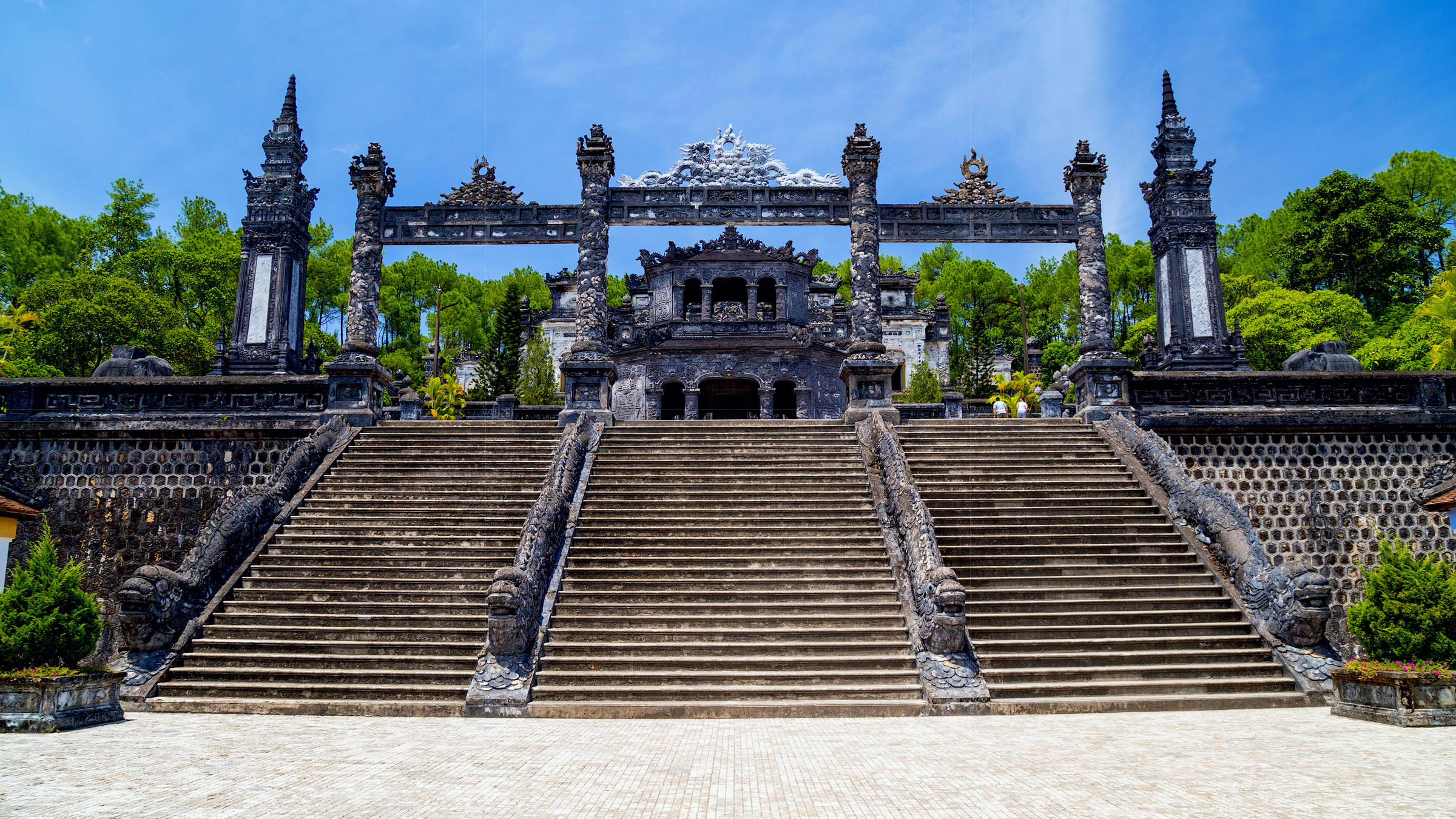 THIEN MU PAGODA
Thien Mu Pagoda is the most recommended religious site to visit in Hue. The significance of the Buddhist temple is the seven-story stupa called Phuoc Duyen with 21 meters in height. Each floor of the tower has a meaning associated with Buddhist theory. The beautiful temple lies on the bank of the peaceful estuary of the Perfume River. Hence, it’s great to reach the place by sampan boat. 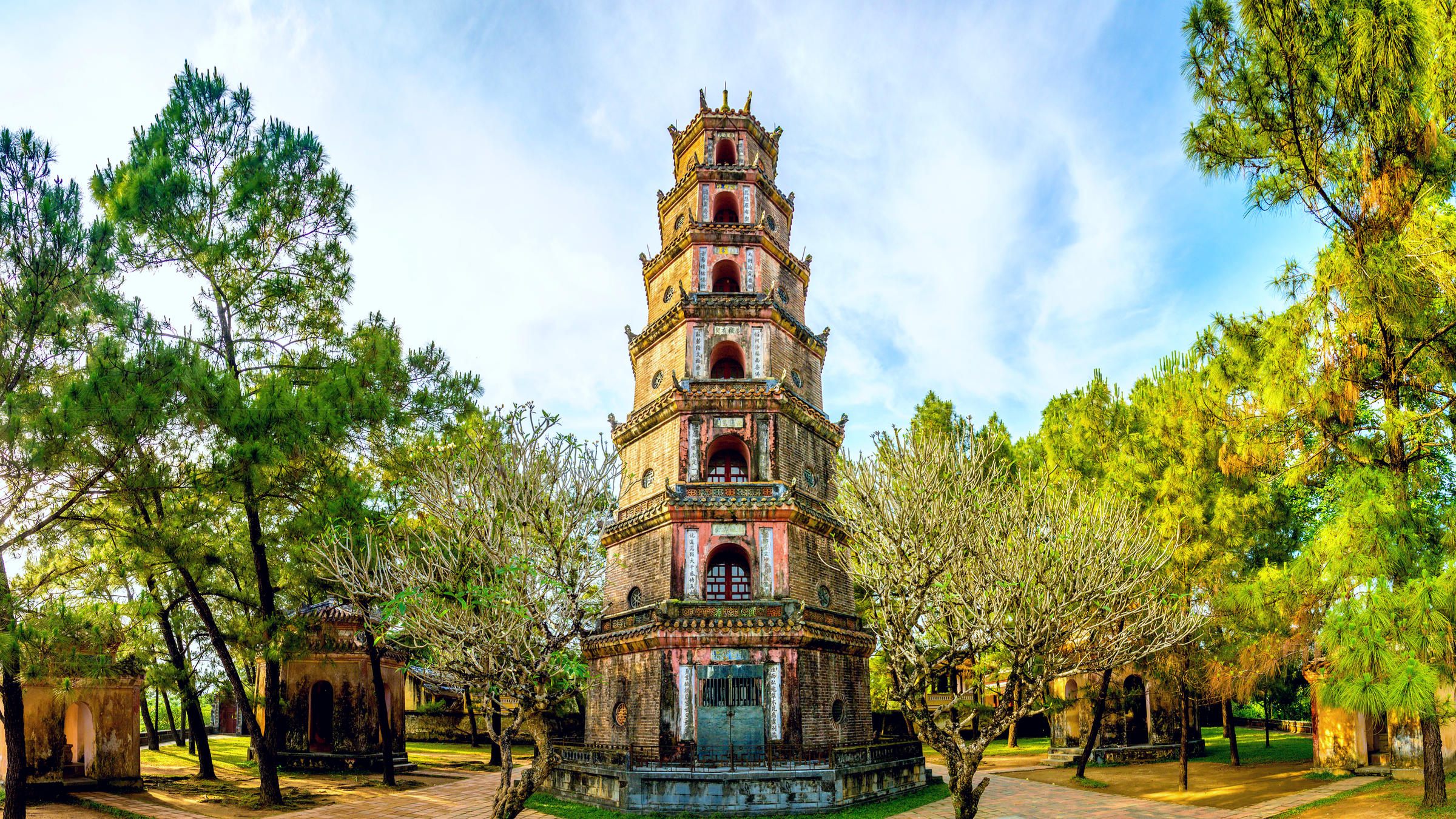 THANH TOAN VILLAGE
Situated in the outskirt of Hue which is 8km away from the city center, Thanh Toan village is a peaceful village demonstrating the best of Vietnamese rural life. Find yourselves relaxed amid the tranquil scenery of green paddy fields and the rustic ambiance of the countryside. LANG CO BEACH
Lang Co Beach is a fantastic destination underrated by tourists. Its clear water ornated with a long white sand stretch never fails ocean lovers. The pristine beach is backed by a green strip of hills making its picturesque landscape memorable.
Midway on the track along Hai Van Pass from Danang, Lang Co Beach is a reward for those traveling with ease. Heeding the time to visit, August to September should be avoided as the stormy season begins in the South China Sea.