Hanoi is a unique city in the world of which a vibrant history is so subtly displayed on every street. Ancient oriental landmarks mingle with present-day tube-houses ushering visitors to interesting hidden alleys. Remains of French colonial buildings situated along splendid boulevards enlighten the city center. Not far away, the heart of Hanoi called the ‘Old Quarter’ fascinates both tourists and locals with an incredible abundance of retail shops, markets, and food stalls. Hanoi is well-known for its varied selection of street foods. The culture is so lively, it spills on pavements, it lives in her veins. With a thousand-year of dramatic history since its establishment in 1010, Hanoi hence offers a variety of museums and art galleries as well as relic sites telling intriguing stories she witnessed. Moreover, dozens of craft villages scattered around the city’s outskirt will be a perfect get-away from the mess of motorbikes in the center and demonstrate the creativity of native people. Hanoi now serves as the capital city of Vietnam but beyond the country’s political hub, she is regarded as the capital of fun, joy, and hidden charms.

Noi Bai International Airport is the gateway to the city located in the Northeast District of Soc Son. It takes a 40-minute drive from the airport to downtown Hanoi. Upon arrival, travelers have several options to reach the city center such as a taxi, bus, or book a private car.

The most popular idea of transporting in Hanoi is to book a private car with a private driver. Transport service companies here offer a selection of vehicles from a 7-seat SUV to 50-seat coaches. Visitors can indeed save their time and money with a packaged car booking rather than ponder to search for a vehicle at every move whilst struggling with the language barrier, payment method, and skepticism about service quality, …

Hanoi is best known for its fascinating motorbike culture. If you are adventurous enough to try the nerve of involving in the chaos of Hanoi’s traffic, then hiring a motorbike is recommended. You may want to seriously reconsider driving your own vehicle, otherwise, plenty of local services offer a much safer and better-planned ride with experienced drivers so that you can enjoy the scenery while on the back of the bike.

This is certainly a universally good way to explore any place on Earth. Once arrive in downtown Hanoi, visitors can be enthralled by a maze of street alleys displayed with numerous shop signs. This unique characteristic of Hanoi can only be thoroughly explored by a walk. Heed not the lack of sidewalk in the city center, Hanoi is a friendly and safe place to get around on foot. It is astonishing to immerse yourselves into the crowds of vehicles and overcome the nerve of crossing the most chaotic streets in the world. Visitors can book walking tours or stroll around by themselves instead of renting a car or motorbike.

HO CHI MINH MAUSOLEUM
Inspired by that of Lenin in Moscow, Russia, the Mausoleum of Ho Chi Minh was built in 1975 to host the embalmed body of the country’s hero. On the 2nd of September, 1945 right at the site of his final resting place, Ho Chi Minh read the declaration of Independence marking the birth of Vietnam’s present-day nation. The mausoleum is part of a massive complex in honor of Ho Chi Minh in which significant sites not to miss are: the magnificent Presidential Palace, the residence of Ho Chi Minh, and the One pillar pagoda. Whereas taking queue to visit the Mausoleum, behold the landmarks shrouding the city’s main square with government buildings dated back to the early 20th century.

TEMPLE OF LITERATURE
The sanctuary of Confucius was built in 1070 during the Ly dynasty also houses the first University of Vietnam. A grandiose complex of ancient architects exhibits various items to give visitors a glimpse of the country’s education in the past. Take a tour to this prestigious relic to admire the rich treasure of Vietnam’s literature and better understand local culture and way of life. Apart from the grand worshipping hall to famous figures, the temple complex features the two most visited sites which are the Khue Van pavilion named after a constellation, and the garden of stone steles inscribed with information of national examinations and name of the country’s talents through history. ONE PILLAR PAGODA
Following his Majesty Emperor Ly Thai Tong’s dream in which he met the Goddess of Mercy, a magnificent Buddhist temple was built in 1049 which later is called One Pillar Pagoda. The landmark has a unique architect resembling a lotus flower on top of a tall stone pillar. It unfortunately was destroyed in 1954 by the French but was quickly rebuilt. The design of the pagoda reflects the Buddhist belief that the world was created like a lotus flower growing from the water. The pagoda is situated within a small pond covered in lotus blossoms which are regarded as the symbol of purity. HOAN KIEM LAKE
Hoan Kiem Lake is at the heart of Hanoi. It is regarded as the most iconic image of the capital city which is often imprinted on podcasts. On the water of the lake lie two famous landmarks worth seeing. The sacred temple Ngoc Son built on an islet connects to the shore by The Huc bridge (literally mean the first beam of the Morning Sun). The other landmark is an old structure called Tortoise tower located in the middle of the lake. Legend of Hoan Kiem lake associates with Emperor Le Thai To who is said to return a holy sword to the genie Tortoise after defeating the Chinese invader of the Ming dynasty. Thus, the Vietnamese name of the lake could be understood as the lake of the returned sword. The streets that border the lake are turned into pedestrian ways at the weekend where lots of locals and tourists spill on to enjoy street performances. THE OLD QUARTER
A traditionally commercial district well-preserved within a city of fast-paced modern urbanization. The old quarter of Hanoi is the best demonstration of the local lifestyle as well as the city’s tourist hub. The characteristic of Hanoi can be found at its best here for all aspects: customs, cuisine, architecture, fashion, and the hospitality of local people. The former 36-street area has been expanded to a much larger city today but Hanoi is still most loved for her old image in which the old quarter takes the central spotlight. Strolling around the old quarter is a must when visiting Hanoi. Take no rush to sight at the brilliant mix of the past and the present of Hanoi depicted by arrays of old colonial houses in contrast to glossy boutique hotels. All are stuffed in a maze of zig-zag alleyways to your astonishment. 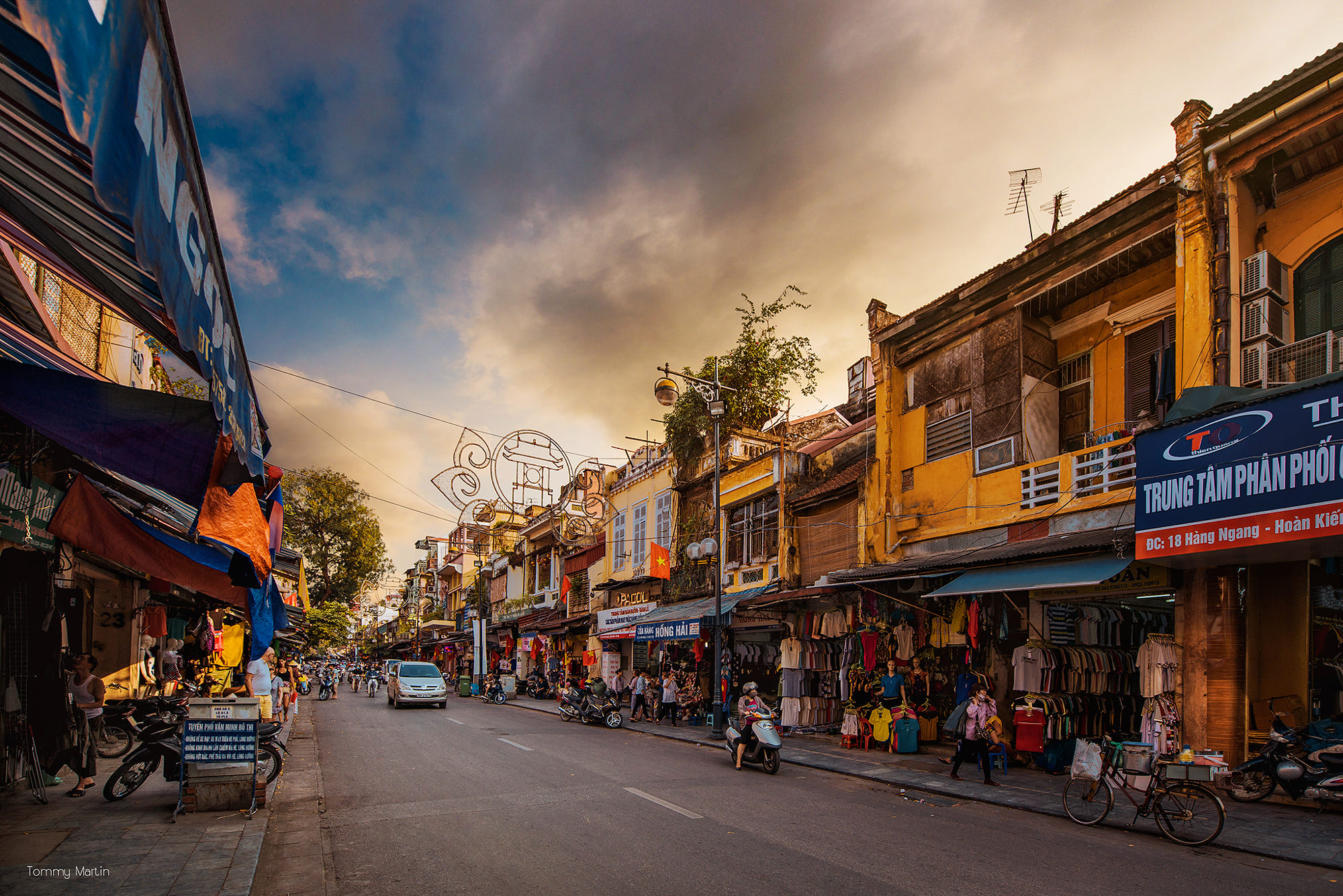 HANOI OPERA HOUSE
It’s arguable that The Hanoi Opera House is the best heritage of the French colonial era in Hanoi. Its magnificent architecture was modeled by the grand Opera house in Paris. Absolutely brilliant location of the landmark makes it a must-visit place while in Hanoi. Neighbor to the iconic Hoan Kiem Lake and the old quarter, The Hanoi Opera house takes its position as the center of so-called the French quarter. From its perspective which opens to many directions, visitors can set course to their next part of the trip. WATER PUPPET THEATRE
Water puppetry is an ancient Vietnamese art performed on a special stage of water pond under a veiled station for puppeteers who manipulate puppet characters. The shows mostly tell stories of Vietnamese life in rural areas or historical legends of the country often accompanied by traditional music, fireworks, and light effects. There are two recommended water puppet theatres in central Hanoi: Thang Long and Bong Sen (Lotus) both are located by the shore of Hoan Kiem lake. MUSEUM OF ETHNOLOGY
A massive museum exhibits numerous artifacts and demonstrations of ethnic diversity in Vietnam. Some may be surprised by the fact that there are 54 different ethnic groups with many languages in Vietnam. The Viet (or Kinh) people are the majority and 53 other ethnic groups with a small population are regarded minorities. The museum features two sections with indoor exhibition showcases artifacts and items whilst the outdoor section presents replicas of various ethnic architecture. The Museum of ethnology is recommended for tourists who later explore mountainous areas of Vietnam. 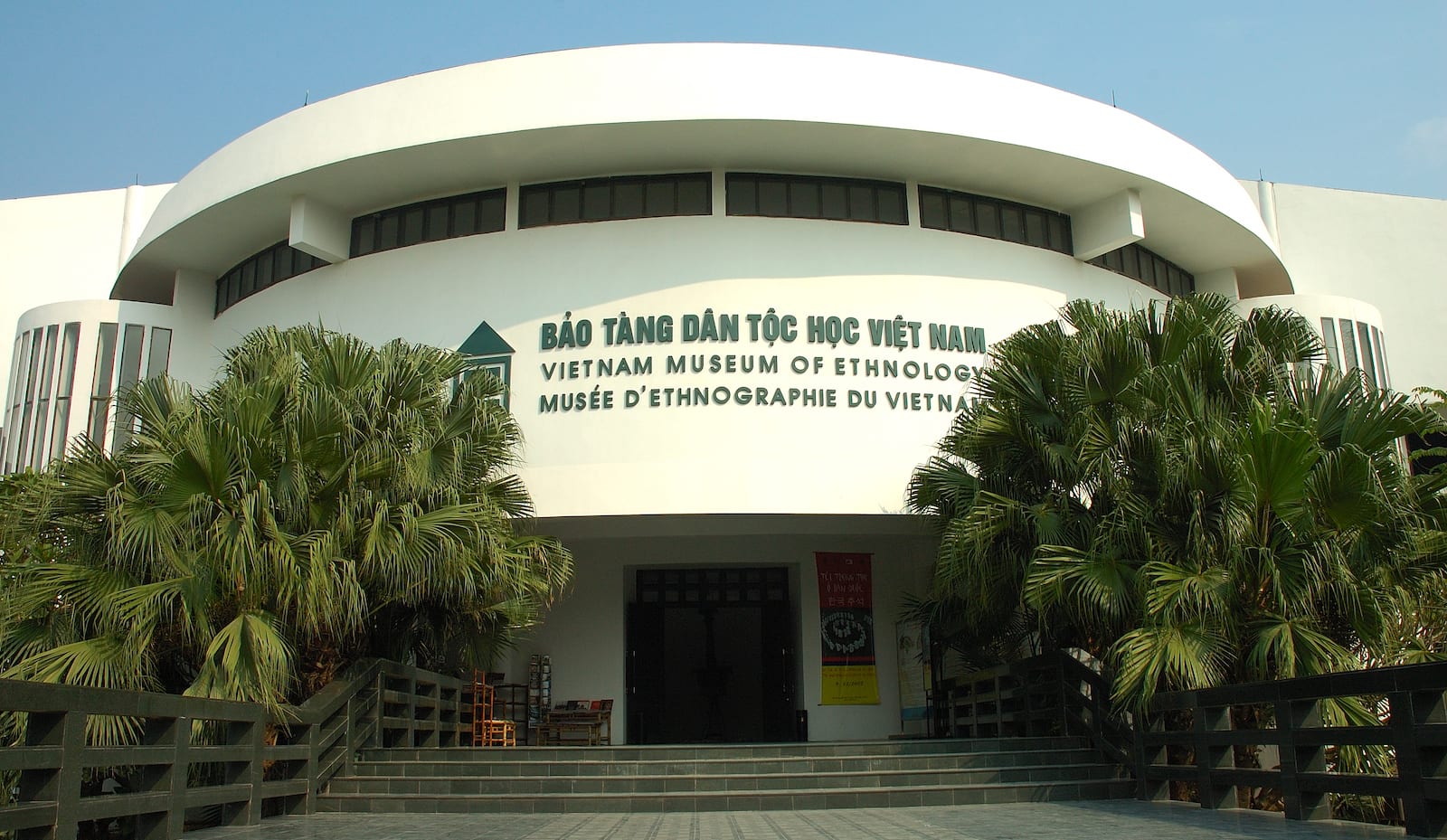 QUAN THANH TEMPLE
Lying by the shore of stunning Hanoi’s Westlake, Quan Thanh Temple was built at the time when Hanoi city was found. The temple venerates Saint Tran Vu, a legendary figure in Vietnamese culture whose story was told in the 2nd century BC. The significance of the temple is a giant statue of Saint Tran Vu erected in 1667. 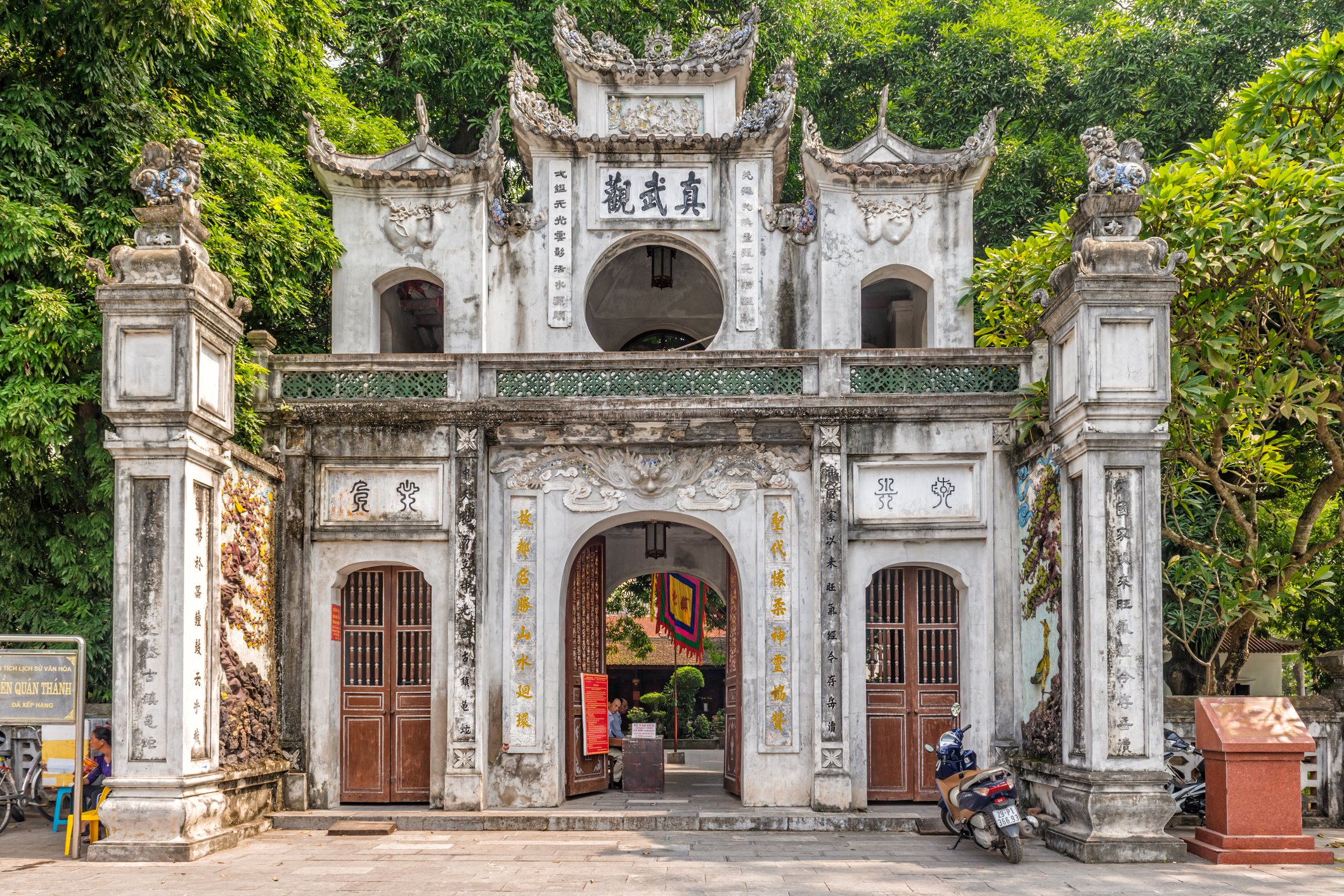 TRAN QUOC PAGODA
Tran Quoc meaning the Guardian of the nation is the oldest Buddhist temple in Hanoi. Located on an islet in the Westlake, the ancient pagoda is connected to the shore by a concrete bridge. The pagoda featuring a garden of towers and two worshipping halls has undergone several refurbishments. The revered Buddhist temple also has a sacred Banyan tree said to be a part of the original tree where Buddha meditated and be enlightened. The tree was a gift brought to Vietnam by the former Indian Prime Minister during his state visit to the country in 1959. 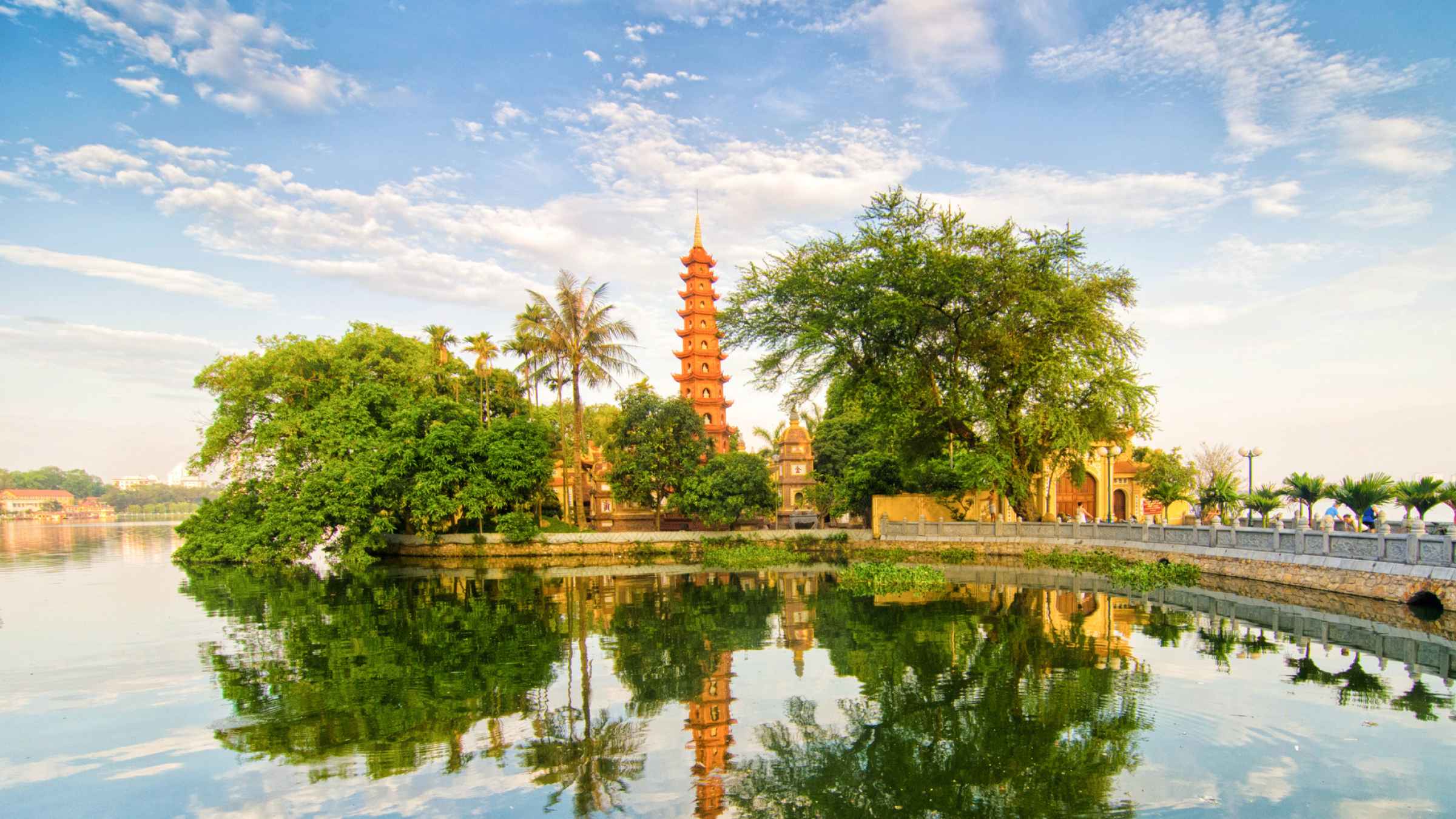 BAT TRANG CERAMICS VILLAGE
Bat Trang Ceramics Village is a famous destination in Hanoi which is located on the bank of the Red River. It’s 10 kilometers away from the Old Quarter and is highly recommended for those who love local craft-wares. The village has a tradition of hundreds of years producing pottery wares for household use and spiritual objects. Today, its production has been diversified from art to high-quality ceramic items on demand. The reputation of Bat Trang ceramics village goes beyond the country’s borders thanks to its excellent artisans’ skills. There are several ceramics workshops in the village today that still maintain traditionally manual production. Visitors to the village can create their own pottery wares following the instruction of local artisans and bring them home as a souvenir.